WorldFengur, a global database for all Icelandic horses

The introduction of WorldFengur (WF) is without a doubt a milestone in the history of the Icelandic horse. Who would have thought, when WF was introduced and made available to the public at the 2001 World Championships in Austria, that twenty years later over half a million purebred Icelandic horses from around the world would be registered in WF and nearly 27,000 users would have access to the database?

Furthermore, it is impressive to see how this database has connected countries and people with a common interest in the Icelandic horse in such a unique way. Finally, all member countries of FEIF are now participating in this worldwide project. WF has set a standard that has advanced the breeding of Icelandic horses in many countries, because breeders have access to uniform data that can be used to stay informed and improve one´s breeding.

In all countries, the registration of Icelandic horses in WF is done according to the same principles, no matter where the horse is born. The same applies to the international ridden breeding assessments, which are carried out in accordance with the same rules. Subsequently, a uniform breeding value estimation is carried out for all Icelandic horses in the global population, thus making breeding value predictions comparable for all Icelandic horses. Registration in WF also warrants that an Icelandic horse is purebred. Only if the pedigree of a horse can be traced back to Iceland is it eligible for registration in WF and receives a FEIF ID, and only then is this horse considered a purebred Icelandic horse. This crucial requirement for horses is internationally recognised and ensures the population´s remaining purebred.

To realise this common vision, many dedicated Icelandic horse friends, breeders and scientists have contributed, so that the goal of having “all Icelandic horses worldwide” registered in WF could be achieved. Today, the Icelandic Farmers’ Association (BÍ) and FEIF can look back proudly on having set up a worldwide database for the Icelandic breed, which can be considered exemplary for other breeds as well. 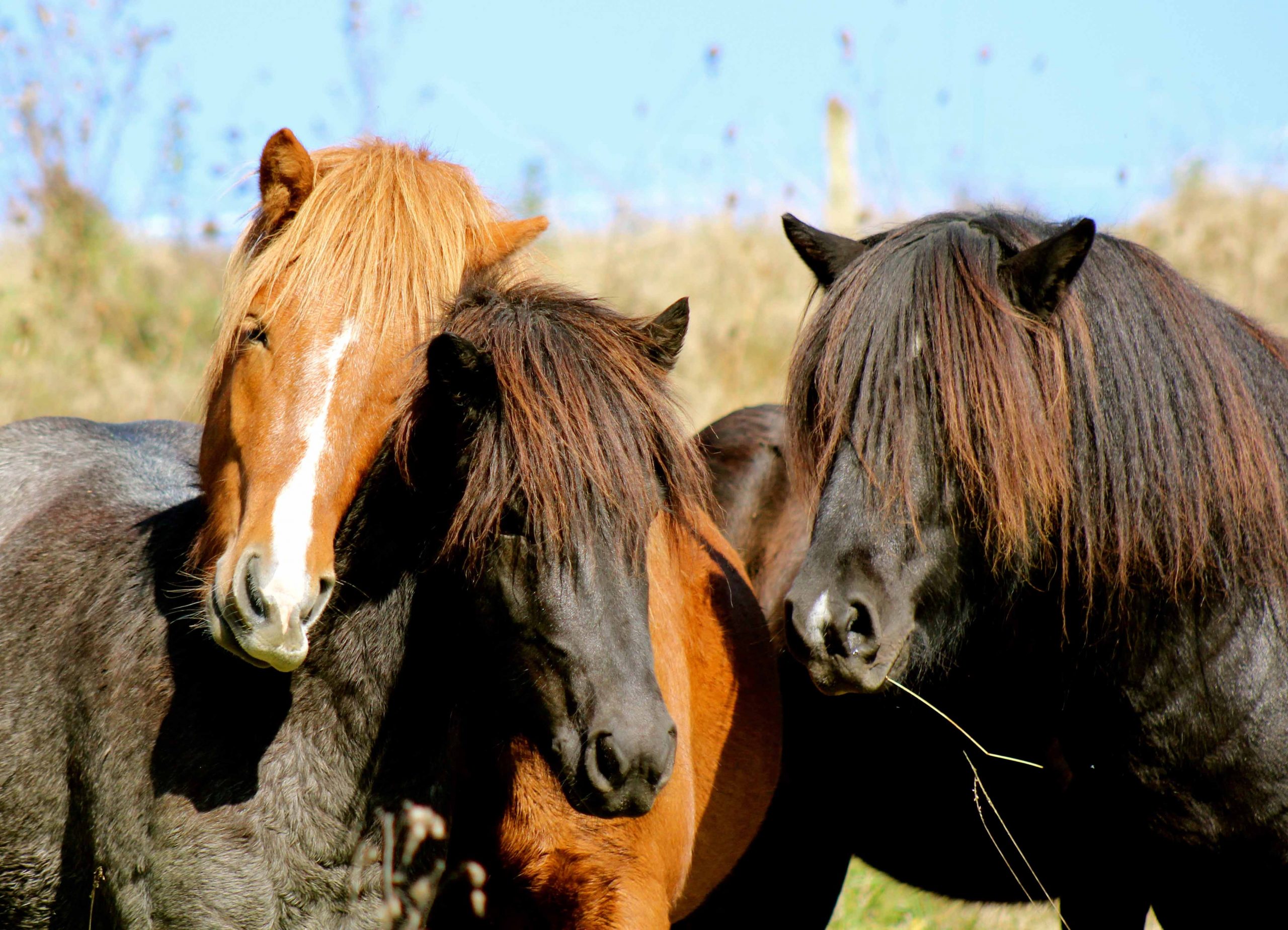 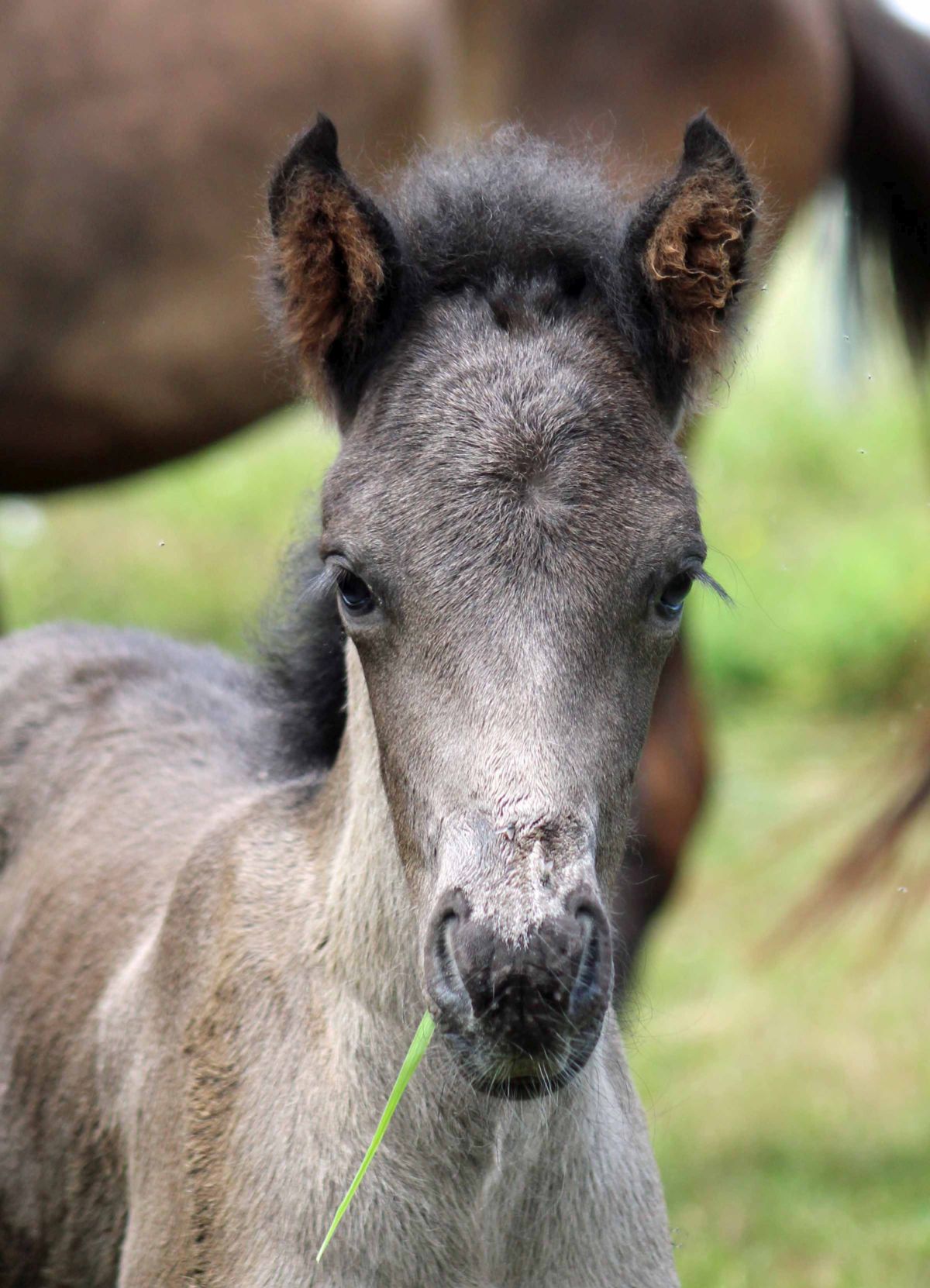 How is the registration of Icelandic horses done in Germany today?

Currently, the identification and registration of all Icelandic horses in Germany is carried out by 13 state-approved horse breeding associations. These breeding associations operate largely on a regional basis and often manage more than 50 different horse breeds. The initial registration of horses and breeders is carried out in national databases, most of which are provided by a computer center specialising in animal husbandry, the “Vereinigte Informationssysteme Tierhaltung” (VIT). Simultaneously, the data of registered horses are either entered into WF with the corresponding life numbers by the staff of said breeding associations, or are forwarded to the WF registrars of the IPZV, who then enter the horses into WF. WF offers the advantage to German breeders that the data of their own horse stock can be viewed and managed online through individualised access; further information about Icelandic horses in Germany and abroad can also be viewed.

What is the task of the Icelandic Horse Riders and Breeders Association (IPZV)?

Since the end of the seventies, the IPZV has been technically and legally responsible for the development of an evaluation system for Icelandic horses: this entails co-ordinating sports and education, as well as publishing performance and competition regulations for riding Icelandic horses. In addition, in the early 1980s, a system for assessing breeding horses under the saddle (IPO) was developed, in addition to assessments for young horses and foals. This assessment system was in force until 2004, when it was replaced by the international ridden breeding assessment (FIZO).

What does WF bring to German Icelandic horse breeders in the future?

By now, WF is no longer an unknown quantity in the German Icelandic horse scene: in Germany, more than 8,200 users make use of their free WF access provided by IPZV.

Therefore, the German WF user group is the largest worldwide. The number of German-bred horses (both alive and deceased) in the database is about 56,000 at the moment, with about 3,500 new registrations added annually. By far the largest part concerns data of newly registered foals.

All 13 breeding associations have access to WF (read-only access), and some also have the right to enter foal data into WF themselves. Thus, all foals born in Germany are registered in WF; this does not depend on the decision of individual breeders anymore, as was common in earlier years.

Every year, 8 to 10 FIZO breeding assessments are organised across Germany and the results (conformation and rideability) are entered online in WF. These and many more things that WF has to offer make the database an indispensable tool for the Icelandic horse breeder and the breeding associations in Germany. 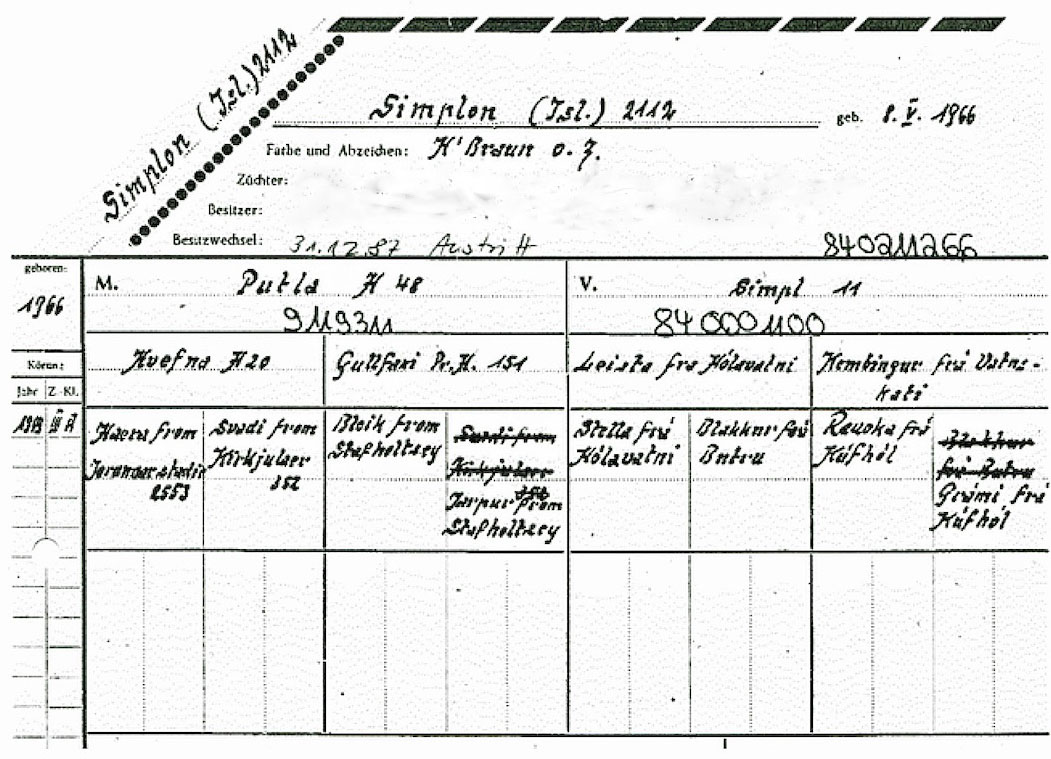 The first Icelandic horses imported from Iceland for riding purposes came to Germany in the mid/late fifties. Registrations of breeding horses and foals were taken care of by the recognised breeding associations then, as they still are today. The registration of information from the Icelandic certificates of origin into the German studbooks sometimes done incompletely or incorrectly, and in addition incomprehensible abbreviations were used. For example, the broodmare Hekla frá Kirkjubæ became Hetla H-10, the Dutch stallion Svaðilfari became Sfaldifare, and Gríður frá Kirkjubæ became Griewe. It also happened that imported horses were renamed, because the names were very difficult to pronounce for the owners or they did not like them. So the stallion Ófeigur frá Hólavatni got the name Simpl, Glóð frá Vatnsenda was called Funny and Gola frá Miðey got the name Schecki. Furthermore, the breeding associations’ knowledge of the conformation of and breeding principles for Icelandic horses was severely limited. This meant that some horses were declared to be Icelandic who were simply of the type of an Icelandic horse or resembled an Icelandic horse in appearance. At that time, a German certificate of origin for an Icelandic horse by no means always meant that the horse was purebred! For this reason, the IPZV after some time created additional certificates that proved Icelandic horses to be purebred, with ancestries that could be completely traced back to Iceland.

Structure and development of the WF in Germany

The WF co-operation project was signed by BÍ (The Farmers Association of Iceland) and FEIF in 2000. In autumn 2001, the first FEIF member countries joined in the project. In March 2002, IPZV, as the German contract partner, signed the co-operation agreement for WF. At that time, Germany already had its own IPZV breeding database, containing data on ancestries and breeding assessments. These data had to be adapted and verified to be transferred to WF. The research of the pedigree information proved to be particularly time-consuming in Germany, as the existing data had been stored in different databases, which sometimes contained incorrect and contradictory information.

The research needed for one horse could therefore take several hours, and the co-operation required to register one horse could extend over several breeding associations, until all ancestors could be traced and entered in WF. In addition, ancestors of the exported horses had often not been registered in Iceland either, which led to further time-consuming research. Up to 8 generations had to be traced in some cases until their lineage had been traced back to Iceland. The oldest line of German-bred Icelandic horses with a complete pedigree going back to Iceland started with horses imported from Iceland in 1933, so these horses had come to Germany well before the Second World War. Here, too, it was fortunately possible to establish their being purebred.

At the end of March 2004, 508 German-bred horses were registered in WF. About 1,000 additional records from the German breeding database had to be checked before they could be entered in WF. Since the number of German-bred horses in WF was quite modest at the beginning, a “processing backlog” of registration requests from associations in neighbouring countries had already built up, because they could not enter horses without their German ancestors. Countless inquiries were sent by mail or fax to the offices of the German breeding associations. Thanks to the great co-operation of these associations, who often had to search in already disused folders in their archives and basements, it was possible in most cases to trace the ancestors back to Iceland. Breeders also readily helped out with researching ancestries. Julia Schlögel and Christiane Rochlitz should be mentioned here as representatives for the numerous helpers who assisted with their valuable research within the German breeding associations. Once the Icelandic ancestors had been found, Hallveig Fróðadóttir at BÍ in Iceland helped out competently and patiently to complete the entries from the Icelandic side.

In addition, Kim Middel from the Netherlands was of great help in transferring the data from the German breeding database. From 2005 on, entering horses in WF was actively supported by Swantje Renken from the IPZV Geschäftsstelle. 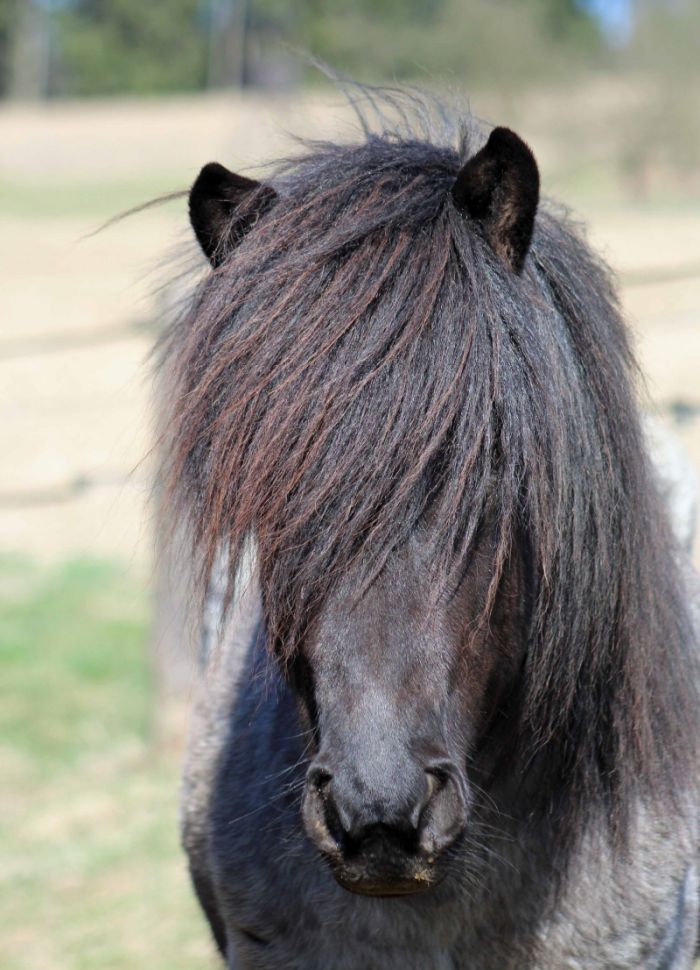