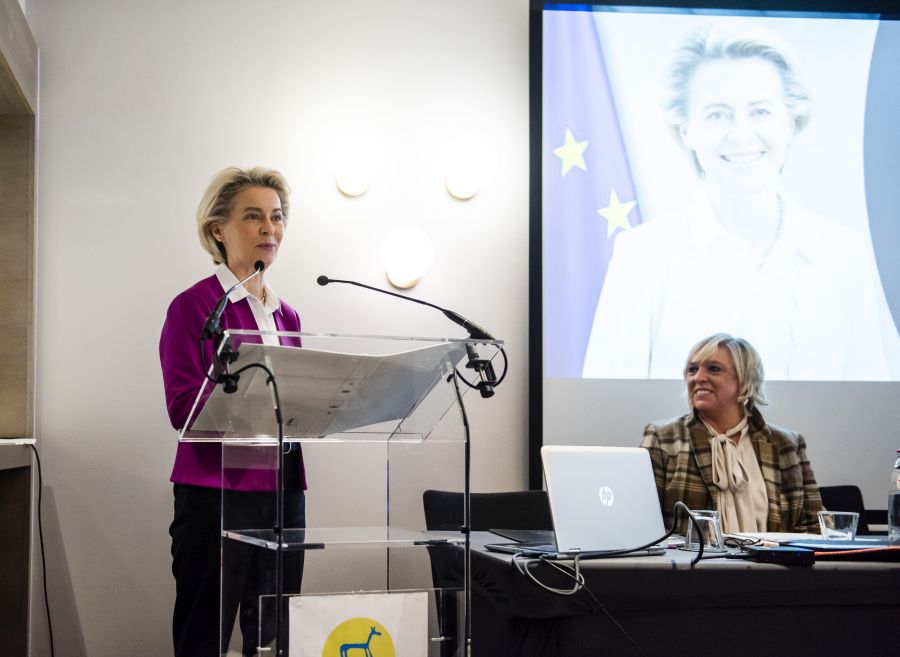 Mrs Hilde Vautmans, Member of the European Parliament (MEP) and Chairwoman of the MEP Horse Group and the members of the European Horse Network welcomed Mrs Ursula von der Leyen at their annual conference.

“We share the same passion for horses” were the introductory words of the President, “horsemanship is a culture, a knowledge and is part of our future”.
Mrs von der Leyen listed the three policies with important opportunities for the equine industry: the agriculture policy and green tourism, NextGenerationEU and the Green Deal. While answering questions after her speech, Mrs von der Leyen also disclosed that she is an active horse rider, also her family members.

The MEP Horse Group was founded in 2011 with the aim of bringing greater visibility to the horse sector on the European political agenda and Mrs Hilde Vautmans has done exactly that this year when protecting and supporting the equine industry and sport during the antimicrobial debate.

Stefan Conter, Belgium breeder and trainer, insisted on the European leadership for sport that must be preserved by politicians and regulators by editing clear and simple rules as well as low taxation of equine activities.
Experts from the industry, Roly Owers from World Horse Welfare, Julius Peters representing the Equine Veterinarians, Paull Khan from the Horseracing authorities, showed how the equine sectors was impacted by the Covid crisis and the Brexit, heavily limiting the movement of horses for breeding and horseracing and sport competitions, as well as leisure activities. The review of the three main pieces of European legislation affecting equines (transport, welfare at farm and slaughter) opens the possibility to improve existing rules by including the latest scientific evidence and make them fit for purpose.

Invited panellists all agreed to say that the Covid crisis made the population in great need for nature and equines are the animals best placed to recreate and strengthen this link.

Mark Wentein, Chairman of the European Horse Network, concluded with concerns about 2022: “will be a most difficult year for the EU equine community. The Covid pandemic is not over yet as well as the Brexit problems. Also, the new EU Animal Health Law (AHL) and the future transportation regulations will create lots of unknown situations. The task of EHN is to remain vigilant and to defend the interests of the equine industry.”

The  European Horse Network is a non-profit network of stakeholders acting at a World, European, and National or Regional level within the European horse sector. EHN has been created early 2010 following the European Horse Conference, EQUUS 2009, organised by the Swedish European Presidency. The aim is to organise a platform to communicate on the horse sector and promote its development 28 European and International structures linked to horses’ activities (Breeding, horseracing, sport, betting, research, recreation and tourism, education, health and welfare). FEIF is one of the founding members.

European Horse Network
We use cookies on our website to give you the most relevant experience by remembering your preferences and repeat visits. By clicking “Accept”, you consent to the use of ALL the cookies.
Cookie settingsACCEPT
Manage consent