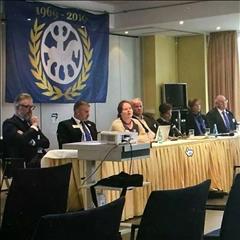 The FEIF Conference 2019 took place in Berlin, Germany and was organized with the great help of IPZV, the German Icelandic Horse association.
As in previous years, the FEIF Conference started with the Annual Delegates’ Assembly, the highest authority within FEIF. 14 out of 19 FEIF member countries entitled to vote participated in the Delegates’ Assembly 2019. The delegates unanimously approved the auditor’s report and the budget for the FEIF year 2018/2019, and released the board from its responsibility.
Gunnar Sturluson, FEIF President, Gundula Sharman, Director of YouthWork and Mia Estermann, Director of Leisure Riding gave a short presentation about themselves and their plans for the next two years in FEIF, and they were reelected unanimously. Jens Iversen was elected unanimously as member of the Arbitration Council for 3 years and Lárus Finnbogason was confirmed as accountant for 2018/19. As the FEIF rules and regulations on doping require having a disciplinary committee of at least three persons from different countries to handle doping cases, the following persons were proposed and elected unanimously: Caroline van de Bunt (Netherlands, for 3 years), Ólafur Arinbjörn Sigurðsson ( Iceland, for 2 years), Annette Hodel (Switzerland, 1 year).
The Delegates’ Assembly agreed on integrating Tölt in Harmony into FEIF Rules, changes in the Statutes on the description of the disciplinary board, the doping board and the required officials were unanimously accepted. Several proposals were referred back to the departmental meetings for further discussion, however the majority of other proposals, sent out with the invitation in December 2018 were accepted by the delegates. The trial proposal to add a young committee member (20-26 years) to all FEIF committees was welcome by the delegates and the scheme will now run for 4 years.
Minutes with details on proposals and discussions from the Delegates’ Assembly but also from the annual department meetings will be published on the FEIF website within the next weeks.