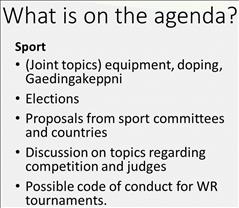 The large group of national sport leaders and representatives from the national as well as FEIF committees had discussions on a long list of agenda items. Florian Schneider was re-elected to the sport committee, Susanne Jelinski joined as a new member.
The participants discussed the topics of equipment, doping and Gæðingakeppni for the joint meeting from the sport point of view – for the decisions taken see the extra news item.
The attendees on the sport leader meeting decided to bring the following topics to vote on at the Delegates Assembly in 2020: (1) the starting order for the second heat in P2 may be the same as the order of the first heat, (2) a new time table for P2, (3) a more accurate way of calculate final results (rounding up at the end) and (4) P3 test as a new test at World Championships.
Several proposals, among them the use of markings instead of a funnel in PP1 and PP2, the idea to show pace sprints in five-gait on the pace track similar to Gæðingkeppni, the showing of T2 finals loose rein tölt on both hands and the leading of horses into the start boxes in P1 and P3 were not accepted by the majority of the delegates.
The proposal of having Gæðingkeppni at World Championships was welcome and further considerations will be made by the responsible committee.

We use cookies on our website to give you the most relevant experience by remembering your preferences and repeat visits. By clicking “Accept”, you consent to the use of ALL the cookies.
Cookie settingsACCEPT
Manage consent