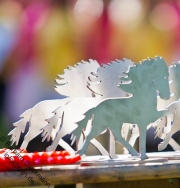 The FEIF Youth work committee had an enjoyable and productive set of meetings in Haarlem. Routine tasks included (a) the review of the very successful FEIF YouthCup 2016, which was held in Exloo, NL. The efforts of the organisers together with the valuable input of other volunteers from all over the FEIF world made for a most memorable training camp and competition. And of course, the great spirit amongst the participants motivates the helpers to do it all over again at the FEIF Youth Cup in 2018, which will be held in Sweden. (b) At the end of October the first FEIF Young Leaders Event will be hosted by SE, and it is hoped that this will turn into a regular event in the FEIF calendar. (c) It was decided to run the Youth video competition again in 2017. The task will be to produce a 5 min video on the theme: Power is…? and we hope to show the winning entries on the big screen during the World Championships in Oirschot. An invitation with the details will be sent to the countries in mid-February. (d) A lot of effort went into the preparation of the Youth meetings at the FEIF conference in Helsinki, Feb. 2017. The main focus of that event will be on the question of how to motivate boys to start riding, and stay with it. The Youth Committee hope that there will be good representation from member countries.